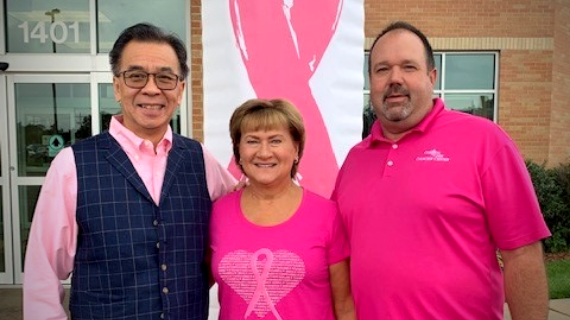 A routine mammogram for Karen Kindhart resulted in a biopsy, surgery and eight weeks of radiation therapy. Karen is a survivor of breast cancer. She credits her faith and loving family, Edward Jones, where she just recently retired from after 18 years and the staff and physicians at Central Care Cancer Center.

With no family history of cancer of any kind, Karen thought it would be easy enough to skip a mammogram once in a while, but the firm where she worked encouraged its employees to get mammograms, and paid for them too. In her annual mammogram, a lump was located. It was a lump not discovered by Karen during a self-exam or even by her doctor. As far as next steps goes, it began with prayer. “I am a woman of faith, and as terrified as I was, I knew that God would take my hand and walk me through it,” Karen said. “I had a biopsy done at Newman Regional Health and my surgery at KU Med Center (in Kansas City).”

It was there that Karen’s doctor encouraged her to have her radiation treatment at Central Care Cancer Center in Emporia. “When it came down to having treatments and scheduling treatments while still working full time, I was nervous about how I was going to be able to do treatments up there. So each day from work I would go to the post office, stop at Central Care for my treatment, go home for lunch and go back to work. It was all very simple, convenient and easy,” said Karen. Plus, by keeping her treatments local and close to home, Karen only missed four days of work from the time of diagnosis to the end of her treatments.

“I consider the staff at Central Care Cancer Center like family. The first time I walked in the door I was treated with a big smile and a warm welcome. As soon as I met Dr. Wong (Radiation Oncologist) and Justin (Branine, Radiation Oncology Manager), I knew I was in good hands,” Karen said. “There were points in the treatment that were hard, were difficult, and Justin and I had to make the decision whether to maybe stop and take a break for a couple of days or maybe go home for the day.” 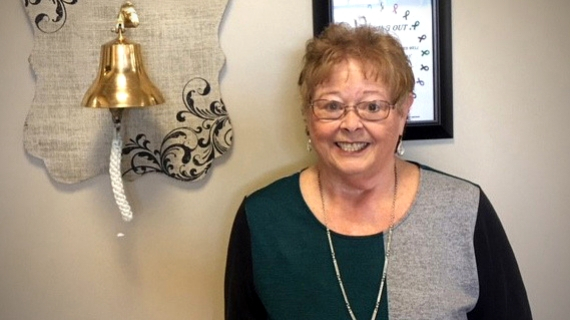 I have cancer, Multiple Myeloma. At age 75, I chose to avoid bone marrow transplant therapy. Though I was frightened by the diagnosis, Dr. Anis Toumeh quickly put my mind at rest, noting that many other forms of treatment have been successful in controlling MM. I have been plagued with chronic anemia for a few years, prompting Dr. Toumeh to move into treatment while I still lingered in smoldering phase of Multiple Myeloma. After only four rounds of fairly comfortable treatment, I am making red blood cells again and having more energy these days!

I credit the progress to Dr. Toumeh’s invaluable expertise as an oncologist/hematologist and his ability to adapt treatment suited to my personal needs. Dr. Toumeh and his nursing staff have compassion for all their patients. The light atmosphere created by the nurses in the chemo room makes my treatment days so pleasant. My family and I have great confidence that my treatment at Central Care Cancer Center in Garden City is top-notch. My care is not compromised because I chose to be treated close to home. Thank you, Central Care Cancer Center! 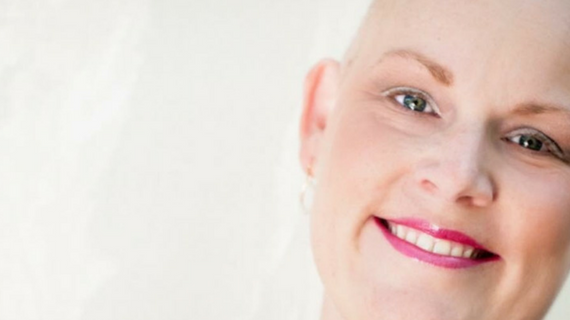 My family has been a part of the Central Care Cancer Center for the past 10 years.

In 2008 my younger brother, John was diagnosed with Hodgkin’s Lymphoma.  At that time we were introduced to Dr. Leo and his staff and I cannot tell you how special we felt.  We weren’t another number, we were treated as if we were the only patient/family there.

In 2011, John had to go to a larger hospital for a second time treatment and in 2014 that hospital gave up on him.  However, Dr. Leo, Dr. Brown and the staff at Central Care Cancer Center DID NOT!!! They gave him two more years of life.  John would always come home and talk about how amazing the nurses were.  They would get him whatever he needed while there.  The financial counselors fought for every medicine to be approved by insurance and also went above and beyond to help find him as many grants as possible. My family and I cannot say enough good about our experience with this, soon to be world renowned cancer center.

I had no idea that six months after my brother passed away, I would be diagnosed with Breast Cancer.  I knew exactly who to turn to, we immediately called Central Care Cancer Center.  It was now my turn to have a one on one experience with this team.  I was a person that was important to them, I mattered.  I was given so many opportunities to get to know the nurses and doctors who cared about me.  They wanted me to feel as good as I possibly could during my cancer journey. The joy felt in this center was contagious. It started with the receptionists, they were always there to greet me with a smile.  Everyone at this center is unbelievably amazing! I am not just saying that.  I have had doctors, nurses and the financial counselors fight for me and my life! Every cancer doctor, their assistants and team of nurses, Dr. Brown and his team will do EVERYTHING they can do to save your life! I was never in need! They covered it all! I will always tell people about this special place.

When I was released from coming back every day, it was bitter sweet.  It was a day filled with excitement.  I WON! However, it was a day that I was also sad.  I had to say goodbye to the new friends that I had made.  The other patients became just as special to me as the doctors and nurses had. Central Care Cancer Center will forever be home away from home to my family and me.  We have a saying that we tell Dr. Leo... "We really do think you are awesome.  However, can we stop meeting on these terms?" 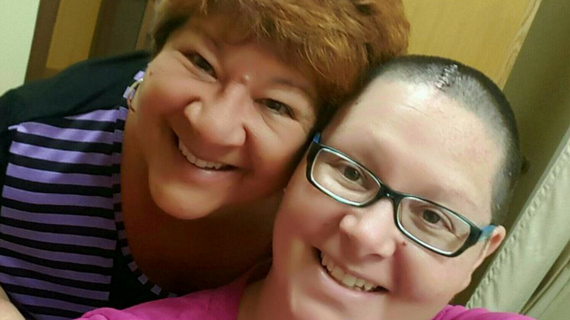 For Marcie Harris Charles, 60, and her daughter, Megan Charles Kramer, 37, receiving treatment for their very different breast cancers so close to home has made a huge impact on their families, as well as themselves. Charles, who lives in Dodge City, and Kramer, who hails from Cimarron, began the breast cancer battles in 2010, when Kramer was diagnosed with inflammatory breast cancer (IBC) — a rare and difficult breast cancer to treat due to its sheer aggressive nature to spread throughout the body.

“In March 2010, Megan was diagnosed with IBC and began radiation and chemotherapy treatments,” Charles said. “On Aug. 30, 2010, she had a double mastectomy that included the removal of 13-plus pounds of tissue. The pathology came back with clear margins, and no signs of cancer in other parts of her body were found. The oncologist saw no reason for Megan to wait to have reconstructive surgery, so on Aug. 30, 2011, her plastic surgeon in Wichita began that procedure. Little did we know...”At Kramer’s checkup in March 2012, her family practice physician noticed a lump on her neck. After the usual battery of tests showed new cancer growth. The decision was made to go to Houston, where she began a three-year-long trial that would take her well into 2015.

“When that drug trial ended, Megan’s cancer had slowed but we just weren’t sure how long that would last,” Charles said. “So in December 2015, she and her husband, Cory, headed to Phoenix, where she would undergo more radiation and chemo for three weeks, come home for a week, then return back to begin the process again.” It was during the Christmas holidays in December 2016 that Kramer decided she needed to stop all of the flights and endlessly long car trips and deal with the hard fact that her kids were growing up without her. Kramer said to her mother, “I can’t be away from my family for weeks at a time any more. I need to come home.” On Christmas Eve 2016, Kramer came home from Phoenix. By now, cancer had spread to her brain.

In January 2017, after consults and more tests, Charles and Kramer sat down with family friend Heather Wright-Renick, BSN, RN, CN-BN, who is a certified nurse navigator and director of The Breast Center at St. Catherine Hospital in Garden City and who also lives in Cimarron. In her usual candor, Wright-Renick, herself a breast cancer survivor, asked when they were going to stop traveling and receive treatment at St. Catherine’s Heartland Cancer Center.

“To be honest, Heather was the reason why we decided to come get treatment at Heartland,” Charles said. “The oncologists, other cancer specialists, plus the nursing staff deserve more praise than there are words for. It’s so much more than just getting chemo for my daughter. It was about this group of nurses who don’t ask, they just make things happen. Whether you’re the patient or the caregiver, they are so dedicated and tuned in to your needs and moods — I just can’t say enough good things about what this group of compassionate professionals has done for us during a very stressful and frightening time.”

After providing care and support for her daughter’s ongoing treatment and her family since 2010, Charles found herself being suddenly moved from caregiver to patient. On August 30, 2017, she found herself at the end of her every four months breast follow-up appointment with a diagnosis of invasive ductile carcinoma.

According to Charles, Heartland compared to other cancer centers she and her daughter have gone to, and she says Heartland always puts the patient and their family first. It has helped ease the burden of her caregiver husband Marc, who is chauffeur, chef and comforter for both his wife and daughter. She explained that in their situation, with both mother and daughter as patients, both immediate and extended family members stepped up, including Kramer’s husband, Cory (who was also holding down a full-time job) and his parents, Jim and Jean Kramer, also of Cimarron, who made sure their daughter-in-law got to appointments and that the grandkids stayed connected.

“We never have to wait,” Charles said about Heartland. “We barely get sat down in the waiting area before the nurse is coming over to get us. A big thing for us is the coordination of Megan’s and my treatment days and times — what an accommodation! So instead of traveling back and forth three days a week, we can get our labs, doctor appointments and treatments all done on the same day. That has been an enormous impact on our families who have had to juggle their work schedule to bring us to Garden City. You couple that with the volunteers, the outstanding work and contributions that Leave A Legacy does every day for patients and their caregivers — I’m just so proud that we have this incredible center in southwest Kansas that provides leading edge technology with a deep compassion and care for the people they serve. Blessed. We are so blessed.”