This article originally appeared in the Breast Cancer Awareness Tab of the Great Bend Tribune.

Central Care Cancer Center is the only comprehensive cancer treatment center in the Barton County and surrounding counties.

LUCAS – Vicki McDowell’s journey with breast cancer has been a long one. Now, the courageous retired school teacher said she realizes that journey has no end.

“There is probably not a cure involved,” she said, adding she continues to receive treatment through the Central Care Cancer Center. “It is a maintenance-type thing so that it doesn’t get worse.”

But, McDowell said whatever one does, get all the available testing. She is still alive today because of mammograms and other preemptive examinations. 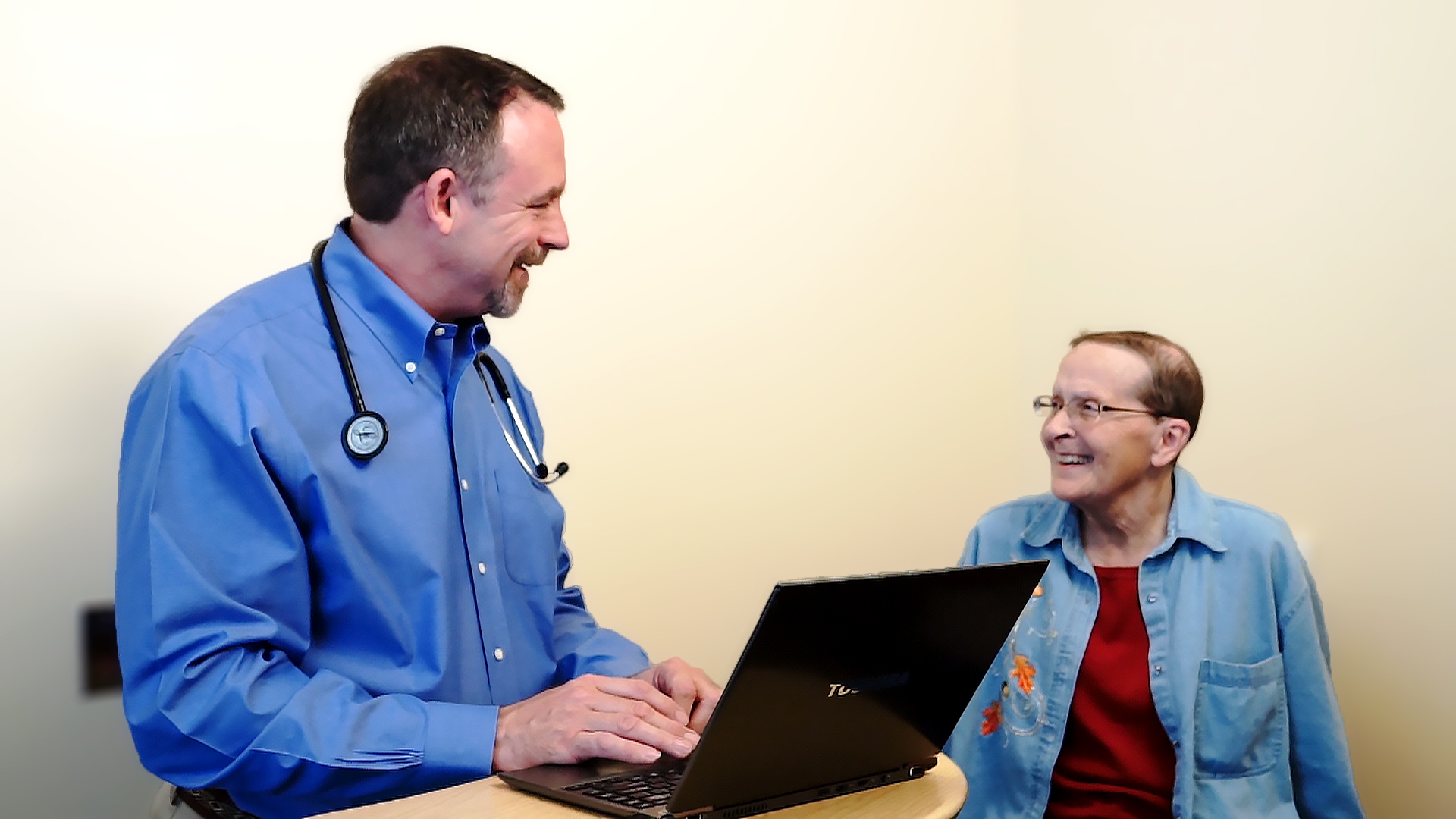 McDowell taught first and second graders for over 40 years.

“They always keep you on your toes. They keep you young, too,” she said.

She and her husband were looking forward to retirement. Then she went in for her annual mammogram 14 years ago.

“I was originally diagnosed with breast cancer in 2004,” she said.

At that time, she had a lumpectomy, a surgery to remove the cancerous tissue.

But, “in 2006, a follow- up mammogram found another suspicious lump,” she said.

This led to a mastectomy, a removal of her breast. Her journey was still not over.

“I thought that once you had a mastectomy, everything would be OK,” she said. “Unbeknownst to me, that is not the case.”

After a few years past, she started feeling an unusual pain in her back and shoulder. She had it checked.

There were numerous tests and a CAT scan. Then, it was discovered that her breast cancer had metastasized into her liver.

“If you have any odd pains, it doesn’t hurt to have them checked out,” she said. “That’s why I’m still alive.”

McDowell and her husband, a heart transplant survivor, are settling into this new reality.

“We are still active in church, community and family,” she said. Although long-distance travel is out of the question, “there are a lot of neat things to see in Kansas.”

For the past two or three years, McDowell has taken part in a cancer drug trial through the University of Kansas Medical Center. The goal is to determine the proper dosage.

She keeps her positive attitude, despite the continued treatments. These are on-going, but now only bring her to Great Bend every few weeks.

Once someone is diagnosed with breast cancer, medical oncologist Dr. Mark Fesen said the first step is to visit with a surgeon. Fesen has been one of the oncologists working with McDowell.

Soon after that , the medical and radiation oncologists are often brought in to the picture. While most breast cancers are handled with surgery, there may be a need to plan a possible long-term treatment regimen. 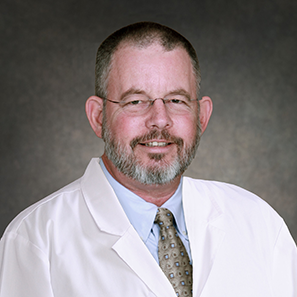 Medical oncologists deal with “systemic” therapy (chemo, immuno, hormone and support therapies), said Dr. Thomas Hegarty, who is himself a radiation oncologist with Central Care Cancer Center. “(Medical oncologists) deal with cancer from the top of the head to the bottom of the foot, the total body.”

Radiation oncologists fill the gap between other treatments, he said. “We use radiation to treat tumors,” focusing on specific site and regional care.

“Treating breast cancer is typically a combination of both,” Hegarty said.

After the surgeon removes the lump and the medical oncologist administers the chemo treatments, radiation is used to eliminate any small remnants of the tumor. There needs to be more than surgery alone, he said, adding that there is a 40 percent chance just removing the tumor will fail.

This is an indication that many women are heeding medical advice and getting regular mammograms.

Breast cancer is the second leading cancer among women and the second-leading cause of cancer death among women, yet death rates are continuing to decrease. “We are seeing more awareness,” Fesen said. But, “we could do better.”

Early stage breast cancer confined to breast is usually treated with surgery first, then it is determined if the medical oncologist is needed. After that, the radiation oncologist is brought in if needed.

“We think of breast cancer as a body-wide problem,” Hegarty said. “It’s a team approach.”

But, the doctors said there are no guarantees any one of these treatments will work. “That’s why we push for screening,” Hegarty said.

Even as technology improves and mammograms see more detail, they are not enough, Hegarty said. Regular physical exams are also crucial.

The most common type of breast cancer Fesen sees is invasive ductal.

About 80 percent of all breast cancers fall into this category and these typically show up in mammograms.

Other types include invasive lobular, which don’t always appear in a mammogram and present

as a lump. There is also inflammatory breast cancer, which looks like a red rash or infection.

is required, that can run every three weeks for four treatments, and can take up to a year.

Beyond treatment, there are many support groups available for patients who are undergoing breast cancer treatment, Fesen said.

“For women who are upset, panicking and worried, these supports are critical,” he said.

For those who are not diagnosed with breast cancer, there are proactive steps someone can take that will help catch breast cancer in an early stage, Fesen said. Regular checks by a doctor and regular mammograms are vital. But, “mammograms detect, but not prevent breast cancer,” Fesen said. “That is just part of the equation.”

Not being over weight, doing regular exercise, lowering alcohol consumption, not smoking will help enormously, he said. Also, a proper diet (including such things as fresh fruit, fish and olive oil) is important.

Breast cancer is the second most common kind of cancer in women. About 1 in 8 women born today in the United States will get breast cancer at some point.

The good news is that most women can survive breast cancer if it’s found and treated early. A mammogram – the screening test for breast cancer – can help find breast cancer early when it’s easier to treat. National Breast Cancer Awareness Month is a chance to raise awareness about the importance of detecting breast cancer early. Make a difference!

Spread the word about mammograms, and encourage communities, organizations, families, and individuals to get involved.

Other than skin cancer, breast cancer is the most common cancer among American women. Getting

What Are the Symptoms?

There are a number of ways doctors can test for breast abnormalities, including simple physical exams and family history assessments to X-rays and other radiation screenings to find a tumor, pinpoint a problem area or determine how far cancer has spread.

The testing will start with basic exams and mammograms. If your doctor finds anything abnormal in the regular screenings, she may order additional tests such as ultrasounds, MRIs, blood tests or a biopsy.

Although cancer presents differently in different people, the National Cancer Institute listed a number of warning signs for which women should be on the alert and contact their doctor if these appear.

They include: a lump or thickening in or near the breast or underarm; changes in a breast’s size or shape; skin puckering or dimpling; a nipple turned inward; fluid coming from the nipple; or scaly, red or swollen skin.

Checking yourself can be part of a healthy breast regimen. According to the NCI, self-exams have not been found to help reduce the number of deaths from breast cancer, but it can offer some benefit; many women find lumps on their own, though these frequently are not indicative of cancer. The breast tissue can have cysts and other lumps. It’s important to remember breast tissue changes during menstruation and menopause; pregnancy, aging and taking birth control all can cause the breasts to feel different.

Clinical Breast Exams
During an annual physical, your doctor will examine your breasts for lumps or other changes. She will also feel around the breast and test the lymph nodes, which are one of the first places cancer spreads. As with self-exams, the breast tissue can change from year to year; your doctor will determine if further testing is needed. During this time, you can also talk about your family history with your doctor, which could be indicative of cancer risk.

Mammograms
A mammogram is an X-ray of the breast, which can find tumors that can’t be felt with physical exams. Mammograms can also find small deposits of calcium that may indicate breast cancer. Doctors also may use it after breast cancer has been found to determine how far it’s spread. The medical community recommends regular mammograms for women age 40 and older.

Breast Cancer Awareness Month (BCAM), also referred to in America as National Breast Cancer Awareness Month (NBCAM), is an annual international health campaign organized by major breast cancer charities every October to increase awareness of the disease and to raise funds for research into its cause, prevention, diagnosis, treatment and cure. The campaign also offers information and support to those affected by breast cancer.

Breast cancer awareness month is a yearly campaign that intend educate people about the importance of early screening, test and more. This campaign starts on October 1st and ends on October 31st every year.

NBCAM was founded in 1985 in October as a partnership between the American Cancer Society and the pharmaceutical division of Imperial Chemical Industries (now part of AstraZeneca, producer of several anti-breast cancer drugs). The aim of the NBCAM from the start has been to promote mammography as the most effective weapon in the fight against breast cancer.

In 1993 Evelyn Lauder, Senior Corporate Vice President of the Estée Lauder Companies, founded The Breast Cancer Research Foundation and established the pink ribbon as its symbol, though this was not the first time the ribbon was used to symbolize breast cancer: a 68-year-old California woman named Charlotte Haley, whose sister, daughter, and granddaughter had breast cancer, had distributed peach-color ribbons to call attention to what she perceived as inadequate funding for research. In the fall of 1991, the Susan G. Komen Foundation had handed out pink ribbons to participants in its New York City race for breast cancer survivors.

In 2010, Delta Air Lines painted N845MH,a Boeing 767-432ER in “Breast Cancer Research Foundation” special colors. In September 2015, a newer version of the livery was repainted on the same plane.