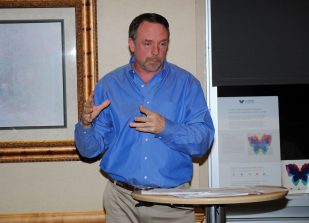 Mark Fesen, MD, FACP speaks at “Shine A Light on Lung Cancer,” held at Heartland Cancer Center, Great Bend on Nov. 16. Fesen is the author of the book, “Surviving the Cancer System: An Empowering Guide to Taking Control of Your Care.”

Lung cancer is the leading cause of cancer death in the United States and the world. Annually, about 200,000 people in the United States are told they have lung cancer and more than 150,000 people in the U.S. die each year from the disease.  With November being recognized as “Lung Cancer Awareness Month,” Heartland Cancer Center, Great Bend, has been doing its part to educate the community about this devastating disease.

The staff at Heartland Cancer Center raised nearly $250 for the Lung Cancer Alliance by holding a bake sale and staff electing to pay $5 each for “Friday jean days” through the month. On November 16, Heartland invited the public to attend an evening of cancer awareness with its “Shine A Light on Lung Cancer” event, which brought in nearly two dozen people.

Dr. Mark Fesen, medical oncologist with Central Care Cancer Center, who practices at Heartland Cancer Center, was the featured speaker at “Shine A Light.” He compared lung cancer awareness with more popular campaigns associated with breast cancer awareness. There’s nearly equal numbers of diagnoses for both diseases annually, yet there isn’t nearly the push for lung screenings and early detection campaigns like there are for breast and some other cancers. Fesen also addressed the glaring distinction that sets lung cancer apart from all other cancers.

“Lung cancer is unique in that there is an industry that is responsible for 90 percent of the lung cancer cases,” said Fesen, who has been practicing in central Kansas for nearly 25 years. “If it was a factory industry where products are made that caused that kind of result, we’d be upset; but it’s not. This disease is very much related to tobacco, first-hand and second-hand smoke. We engage the industry by buying its products. Ninety percent of lung cancer patients have been smokers, but 90 percent of smokers never get lung cancer.”

Because early symptoms for lung cancer aren’t easily detected, Fesen encouraged all smokers and even those who have quit many years earlier, to annually get screened with a computed tomography (CT) chest scan. He told the audience that 85-to-90 percent of newly diagnosed lung cancers have advanced to the point that they cannot be removed with surgery. Annual CT scans for smokers and former smokers would help detect the disease in stages 1 and 2 before it spreads to other areas of the body. In contrast, he said the vast amount of breast cancers are found early, when the mass can be removed with surgery or at least shrunk down in size.

“I’ve found that the average smoker doesn’t come in right away with their symptoms,” said Fesen. “They usually convince themselves that it is something else or that it will go away. If we have early detection and you come in under your own power, then you have a much better chance of being helped. Your prognosis is far greater.”

In addition to Dr. Fesen’s presentation, those in attendance heard from lung cancer survivors Tammy Hayes and Lois Klug. Through the past four years, Hayes has had multiple cancers, including lung and brain cancers. She has undergone chemotherapy and radiation treatments five different times, but is now only taking oral chemo.

“I’ve come a long way, thanks to Dr. Fesen,” a grinning Hayes told the audience.

Klug was diagnosed with lung cancer 20 years after she quit smoking. That was 15 years ago. Since that time, she’s had a couple of surgeries to remove portions of her left lobe, with her last surgery just a month ago. She’s also undergone radiation and chemotherapy.

“Dr. Fesen has been my doctor all the while, so I have to thank him and the staff here at Heartland for all that they do for me,” said Klug.

During “Shine A Light,” Heartland clinic manager and oncology nurse Leann Danner provided opening remarks and offered a call to action to close the ceremony. Also participating in the event, Sister Jolene Geier provided a moment of reflection for the audience.