Dr. Mark Fesen, traveled to Washington D.C. in early November for two days of healthcare meetings with staff members of five U.S. congressmen. A medical oncologist with Central Care Cancer Center who practices in Great Bend and Wichita, Fesen serves on a nationwide healthcare advisory committee, the National Physicians' Council for Healthcare Policy. He has been serving on that committee for nearly three years and is the vice chair of oncology for the council. 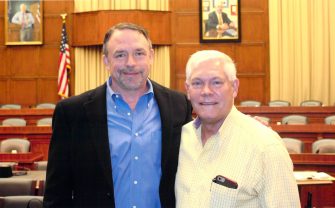 During his most recent visit Nov. 5 and 6, Dr. Fesen met with staff members of Kansas’ two senators, Sens.

The council is comprised of approximately 60 physicians from around the country who connect on a regular basis. The council’s purpose is to enable physicians to speak out publicly about medical issues and government policies. The council annually selects a couple of specific areas in which to enhance the private practice of medicine and works with legislators and regulatory agencies to achieve specific goals that will improve healthcare in the United States.