This article originally appeared in the Leader & Times - Liberal.

The diagnosis of breast cancer is devastating for anyone who has to deal with it, and it is unfortunately an everyday reality for millions.

With those types of numbers, it is important for screenings to take place. 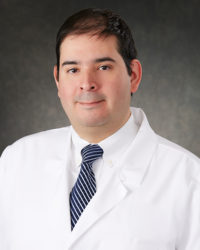 “The most important thing is detecting any cancer or abnormalities early. When we're looking at the screenings with either the ultrasounds or MRIs, it's all about trying to find all that as early as possible,” Dr. Jose Velasco with the Central Care Cancer Center said. “If we can find it to where it's contained before it can spread to other areas of the body, it makes all the difference as far as treatment options and the overall prognosis. That's why it's important to keep up with regular screenings so if something is going on we can detect it as soon as possible.”

According to breastcancer.org, about 40,920 women in the U.S. are expected to die in 2018 from breast cancer, though death rates have been decreasing since 1989, with women younger than 50 have experienced larger decreases. These decreases, the site continued, are thought to be the result of treatment advances, earlier detection through screening, and increased awareness.

“In terms of recommendations and guidelines, there are actually a few different numbers out there from a handful of different groups,” Velasco said. “For example, the U.S. Preventive Services Task Force recommends mammograms once a year starting at age 50 and from ages 40 to 49 every other year. The American Cancer Society recommends mammograms yearly mammograms for women 40 to 44 years old (if they choose) and then once a year for women 45 to 55 years old and women older than 55 should get some type of screening every year, but it doesn't necessarily have to be a mammogram. And like I said, it's important to keep up with those screenings so we can detect anything abnormal early, so don't let it go by the wayside because waiting to do that could cause its own problems. I know a lot of women worry about the expense of mammograms or the results and all of that, but the longer you wait, the more any potential issues could advance and then that will add up to the need for more aggressive treatment.”

Velasco also talked about some of the misconceptions surrounding mammogram exams.

“The most important thing is for patients not to be scared of mammograms. There are some myths out there like if you don't have a family history of breast cancer or other issues you don't need mammograms, but that's not true,” Velasco said. “The ones who are at a higher risk for breast cancer are those with a family history or if they've taken certain hormone therapies and things like that, but everyone is at risk, no matter who you are. There's also the myth of how the radiation used during a mammogram can cause breast cancer, but that's also simply not true because the amount of radiation used for a mammogram is a tiny fraction of what you're exposed to while simply being at work or home. Something new here we have in Garden City is the new 3D mammogram that takes several images to form the whole image of a patient's breast for the doctors to look at and with the 3D mammogram there's a higher chance of a better image of what's actually there and an earlier detection, which is the key.”

According to breastcancer.org, as of January 2018, there are more than 3.1 million women with a history of breast cancer in the U.S., which includes women currently being treated and women who have finished treatment.

“For breast cancer, the most common way to detect it is by a mammogram and if we see an abnormal spot, the next step is typically doing an ultrasound and through the ultrasound is how we find out if that abnormality is solid or liquid and then we can know for sure and then sometimes we'll also need to do a biopsy,” Velasco said. “After the biopsy, depending on what it shows, is when we then talk about treatment options. In the clinic, what happens is the patients will have their recommendation from their primary doctor for the screening and it's mostly to make sure they're getting the appropriate screenings and it's all up to date. What we try to do when we see a patient in the clinic is let them know why they were referred since we also work with blood disorders and hematology, so we get the information needed before the screenings and then everything goes from there. We like to help patients keep everything up to date and if they have any questions or anything they know they can come in and talk to us.”